‘He who does creates’ Joos van Barneveld, better known as DOES, was born in Veghel, The Netherlands, in 1982. In 1997 he discovered graffiti, a passion that coerced him into a double life. For more than a decade, he was forced to combine the daily expectations of working as a  highly sought-after professional athlete with the undercover nightly secrets of an established graffiti writer.

In 2010 DOES saw the possibility to exclusively devote himself to his creative career, developing his practice and carrying his craftsmanship to a higher level with the same dedication, focus, and discipline that his athletic career taught him. His highly recognizable style and execution consist of a mix of influences from old-school writers, his active participation as a member of the LoveLetters graffiti crew, and his own diligent research.

In his drawings and paintings on and off the wall, the focal points consist of 3D lettering, balanced color schemes, and the artist’s capacity to control the purity of outlines and clarity of content. DOES developed his unique style by understanding the intricate construction of artwork and color combination and placement. The strong movements we find in his artwork seem to be wild style, yet precise execution and planning are the core of all of DOES’s work. From his letters, with their dizzying color schemes stretched so much that they seem to release abstract energy and spread drips all over the wall to his detailed paper assemblages that take the haptic 3D experience to the next level.

While he is recognized as a talented draftsman and extraordinary painter, DOES continuously moves the boundaries of his own artistic research constantly in new conceptual directions. The artist is looking at graffiti as an archive from which he can physically extract samples representing his own roots. He incorporates pieces of previously painted walls covered with spray paint as artifacts into his sculptures, developing a unique provenance of otherwise ephemeral street work. DOES’s intention with this archeology of urban spaces is keeping a trace of the geographical coordinates of his walls, readapting the tools of a science that generally deals with past times to underline his own story and the impact of graffiti culture on our society in the present. 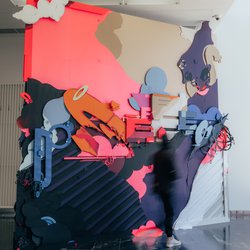 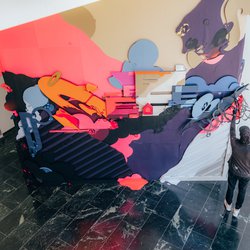 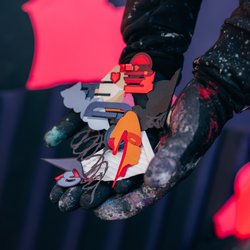 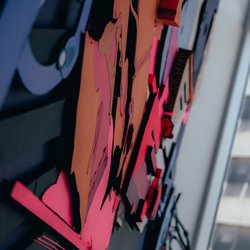